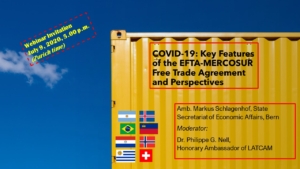 The Latin American Chamber of Commerce in Switzerland is honored to invite you to attend a webinar on COVID-19: Key Features of the EFTA-MERCOSUR Free Trade Agreement and Perspectives with our guest speaker Ambassador Markus Schlagenhof.
Switzerland and its EFTA partners concluded in substance the negotiations of a free trade agreement with the members of Mercosur in August 2019. Switzerland has important economic ties with Mercosur and seeks to constantly strengthen them. In this webinar, Ambassador Markus Schlagenhof, Head of the Swiss Delegation to the EFTA-Mercosur negotiations, will discuss Switzerland’s free trade policy, highlight the key elements of the EFTA-Mercosur FTA and assess the effects of the COVID-19 crisis on trade policy. 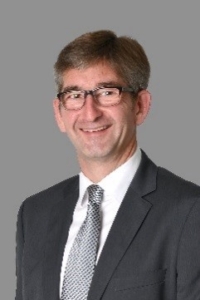 Ambassador Markus Schlagenhof, State Secretariat of Economic Affairs (SeCO), Bern
Ambassador Markus Schlagenhof, since 1st September 2016 Delegate of the Federal Council for Trade Agreements, head of the World Trade Division and Member of the Executive Board at the State Secretariat for Economic Affairs (SECO). Previously, Minister Counsellor and head of the WTO unit. From 2006 to 2012, head of Trade in Goods (as deputy head until 2008). In 2001, he was delegated to the Embassy of Switzerland in London as counsellor and deputy head of the Economic Department. Prior to that, from 1998 to 2001, he served as an advisor to the Division of Technical Barriers to Trade (as of October 1999 as deputy head). He joined the former Federal Office for Foreign Economic Affairs (FOFEA) in 1995 as advisor in the WTO sector, after having served from 1991 to 1994 as research assistant at the University of St. Gallen (Switzerland).
Mr. Schlagenhof studied business administration, economics and law (Undergraduate studies), as well as economics, public and European law and political science (Graduate studies) at the University of St. Gallen. Additionally, he holds an LL.M. degree in European and International Trade Law (Postgraduate studies at the University of Leicester, UK).

Mr. Nell is University Lecturer on trade, investment and integration policy as well as negotiating techniques. Until October 2019, he was Deputy Assistant State Secretary for Bilateral Economic Affairs at the Swiss Department of Economic Affairs, Education and Research. He was in charge of bilateral trade and investment relations for the Americas and held the diplomatic title of Minister.

Mr. Nell holds a Ph.D from the Graduate School of International Studies of the University of Denver and Masters from the universities of Fribourg, Carleton (Ottawa) and Denver. He is Private Docent at the University of Fribourg, where he dispenses courses. He has published numerous articles on trade and integration policy as well as a book on Swiss-EU negotiations for the European Economic Area.

To view the session recording, please click on this LINK 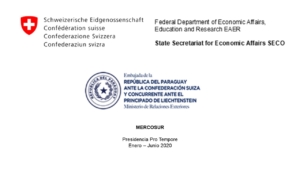