Webinar COVID-19: key role of strong global institutions in addressing pandemics, and learnings so far for the world and Latin America (April 30, 2020) 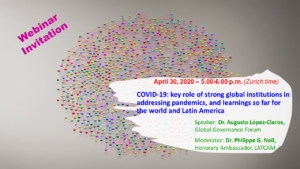 LATCAM is very honored to welcome to this webinar Dr. Augusto López-Claros to speak about COVID-19. In May of 2018 Sweden’s Global Challenges Foundation awarded Augusto López-Claros the New Shape Prize for his work (with Arthur Dahl and Maja Groff) “Global Governance and the Emergence of Global Institutions for the 21st Century”. In his book, Augusto López-Claros proposes a comprehensive set of reforms of UN institutions to address today’s interconnectedness between all parts of the world. The planet faces urgent and existential problems requiring strong governance. In this webinar, the author will look in particular at the severe flaws of today’s global institutional framework in dealing with an issue such as COVID-19, the reforms required, the lessons learned thus far, the risks for failing to meet the Sustainable Development Goals of 2030 and how to move forward. A special emphasis will be put on Latin America.

Augusto López-Claros is Executive Director of the Global Governance Forum. He is an international economist with over 30 years of experience in international organizations, including most recently at the World Bank. For the 2018/2019 academic years Augusto López-Claros was on leave from the World Bank as a Senior Fellow at the Edmund Walsh School of Foreign Service at Georgetown University. Previously he was chief economist and director of the Global Competitiveness Program at the World Economic Forum in Geneva, where he was also the editor of the Global Competitiveness Report, the Forum’s flagship publication. Before joining the Forum he worked for several years in the financial sector in London, with a special focus on emerging markets. He was the IMF’s Resident Representative in Russia during the 1990s.

Educated in England and the United States, he received a diploma in Mathematical Statistics from Cambridge University and a PhD in Economics from Duke University. Recent publications include “Fiscal Challenges After the Global Financial Crisis: A Survey of Key Issues” (2014), “Removing Impediments to Sustainable Economic Development: The Case of Corruption” (2015), Equality for Women = Prosperity for All (2018, St. Martin’s Press, with B. Nakhjavani) and Global Governance and the Emergence of Global Institutions for the 21st Century (forthcoming, Cambridge University Press). A list of recent lectures can be found at: www.augustolopezclaros.com.

Dr. Philippe G. Nell is Honorary Ambassador of the Latin American Chamber of Commerce in Switzerland and University Lecturer on trade, investment and integration policy as well as negotiating techniques. Presently, he teaches a trade policy course at the University of Fribourg. Until October 2019, he was Deputy Assistant Secretary for Bilateral Economic Affairs and Head of the Americas Unit at the State Secretariat for Economic Affairs (SECO) of the Swiss Department of Economic Affairs, Education and Research. He was in charge of bilateral trade and investment relations and held the diplomatic title of Minister. Previously, he held the positions of Deputy Head of the WTO Unit of SECO (1999-2004) in charge i.a. of investment and China’s accession to the WTO; Head of the Unit on Rules of origin, Customs matters and Government Procurement (1992-1999) and Secretary of the High-Level Negotiating Group of the European Area Agreement (1988-1992).