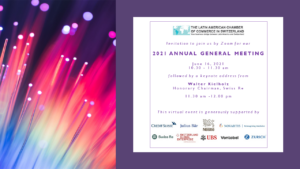 The 44th AGM was the first virtual one ever held by LATCAM.

After welcoming the 33 members and guests, President Ramon Esteve acknowledged the fact that LATCAM had quite a good year despite the difficult and changed work environment due to COVID-19, which led us to introduce our digital program with a number of compelling webinars and an increased international audience.

Treasurer Manfred Ebling presented the audited financial statements, which for the first time in many years were positive, indicating a successful turnaround of the financial situation.

Vice-President Linda Walker von Graffenried presented the patronage membership, which was introduced as a new category in 2021, and thanked the 6 current and 1 future patron for agreeing to support us.

Carlos Represas was re-elected to the Board, however, he will continue in this function as an individual member as of 2022. Ramon Esteve gave an official welcome to the Board for three representatives of our new patrons: Arturo Stoecklin from Bank Vontobel, Jorge Fernández Amann from Credit Suisse and Andreas Berger from Swiss Re.

Our auditor Claire Rojas was re-elected for another year.

Hervé Lohr, Head of the Americas and Deputy Head of Bilateral Economic Relations at the State Secretariate for Economic Relations, Education and Research (SECO) was appointed Advisor to the LATCAM Board and officially welcomed.

After 25 years, the Articles of Association received a major makeover to bring them to a more contemporary level. As of January 1, 2021 and in lign with a previous Board decision, the domicile of LATCAM is no longer Zofingen (AG), but Zurich.

Following the AGM, we were honored to listen to a keynote address on the outlook for Latin America delivered by Walter Kielholz, Honorary Chairman of Swiss Re.  His focus was to a large part on the political developments.

To see the recording of Mr Kielholz’s keynote speech and his answers to the questions of our audience, please click on the following LINK.